What is Foundation Failure?

For most people, knowing what causes foundation failure and being able to identify the tell-tale signs can sometimes be two very different things. (An extensive discussion on the causes of foundation failure can be found in the Frequently Asked Questions section of this website). The following indicators may suggest the need to have your foundation properly evaluated by a qualified foundation specialist or structural engineer.

Exterior Indicators: Cracks in bricks, mortar joints or separations around windows and doors 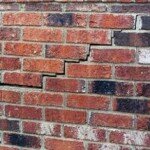 As the foundation of your home settles, the resulting stress can be too much for the brick veneer or foundation wall to tolerate.Cracks usually appear in weak points of the wall, namely, around vents, windows, doors or other structural openings. When checking your home’s foundation, these areas are the best places to start.

Cracks in the brick work can sometimes occur as horizontal separations as sections of the foundation settle. This corner experienced a vertical drop of nearly an inch. 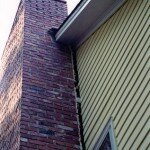 Chimneys are perhaps the most common of all foundation failure indicators.

Large chimneys produce substantial “point loads” on the foundation footings, meaning a very large amount of weight concentrated in a relatively small space. Think of it as the difference between trying to push the palm of your hand into the sand at the beach versus only pushing in your index finger.

When chimneys separate, they can cause additional problems unrelated to the foundation. Roof flashing can become unsealed, allowing moisture to enter areas the flashing was designed to protect. The separation of the caulk seal against the house itself poses the same problem. 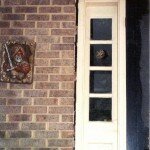 Separations can occur around doors and windows as the foundation settles and rotates away from a plumb condition. Notice the gap between the brick and the sidelight as a result of settlement.

Interior Indicators: Cracks in the sheetrock and doors that won’t close 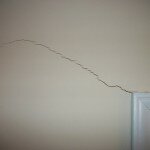 As interior concrete block or brick piles settle, the floor system can experience deflection. The Result is interior cracks in drywall or plaster, or separations of moldings and tape joints. Severe settlement of exterior walls can have the same effect on the interior. 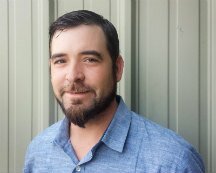